Memes make the world in 2018 go round. Everyone loves memes, even moms on Facebook love memes without even knowing what they are (or knowing how to pronounce the word “memes”).

The newest series of memes sweeping through my Instagram Explore page are the “and I freaked it” memes that are inspired by the song “King’s Dead” by Jay Rock, Kendrick Lamar, Future, and James Blake.

There are certain verses throughout the history of Hip-Hop that become larger than the song, the album, or even the artist’s whole discography. Recent examples that come to mind are Nicki Minaj’s verse on Kanye West’s “Monster”, Kendrick Lamar’s verse on Big Sean’s “Control”, and also Macklemore’s verse on “Thrift Shop”.

(One of those was a joke, you take a guess on which one)

The newest entry into some of those larger than life rap verses is Future’s verse in “King’s Dead”. His verse starts around the 1:14 mark and lasts for about 44 seconds, but the memes will make this verse last forever. The verse has Future making some of his most absurd, sexual lines that he’s ever used, and I’m saying that for a guy who has once talked about sticking his thumb in…well…you know.

Future uses his normal rap voice for the first half, but then goes into a weird, quiet, high pitched voice that I’ve never ever heard him use, just so he can drop lines like “la di da di da, slob on my knob” and also “pass me some syrup, fuck me in the car”. Future continues to be one of the greater wordsmiths of his generation. Here’s his whole verse in its entirety.

[Bridge: Future & Jay Rock]
La di da di da, slob on me knob
Pass me some syrup, fuck me in the car
La di da di da, mothafuck the law
Chitty chitty bang, murder everything
Bitch, I’m on a roll, and I put that on the gang

As I said above, the weird internet community of 2018 has fallen in love with Kendrick and Future’s new phrase “and I freaked it”, spawning a collection of memes. Here’s some of my favorites below. Enjoy.

AND MY FAVORITE ONE BY FAR… 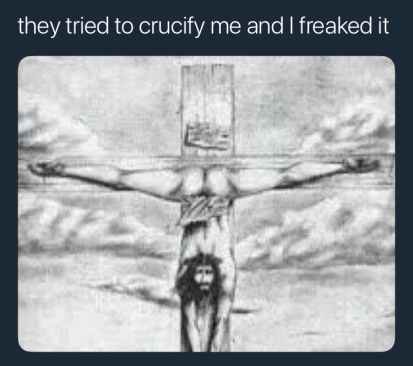 Don’t ask me why M&Ms are being involved so frequently, but either way it makes me laugh my ass off.

Side note: This isn’t the first time Future has turned into a meme. Who can forget this gem from his interview with Nardwuar.