May 25th, 2018 was slated for a cornucopia of Hip-Hop releases for everyone to bump over their extended Memorial Day weekend.

Denzel Curry came out with a new song. YG came out with a new banger with 2 Chainz, Big Sean, and Nicki Minaj. Producer Zaytoven also came out with his own album with an array of your favorite trap rappers. A$AP Rocky was even coming out with his first solo album since 2015, with his new release “Testing”. All of these projects were overshadowed late Thursday night by the anticipation of Pusha T’s seven track album, “Daytona”. I woke up this morning to very high praise for the album, and was ready to bump Pusha’s new cocaine classic all weekend. I was working until 7:15 p.m. US Central time, and by the time I got out of work, the internet was buzzing about Drake.

I was confused. What did Drake do? I immediately realized in the short time I got to listen to it, Pusha T dissed him on a track off “Daytona”. The track was called “Infrared” and in it Push addressed the ghostwriter claims that have followed Drake for a while now. Push says, “It was written like Nas but it came from Quentin”, which is a reference to Drake’s alleged ghostwriter, Quentin Miller. Push later brings up the ghostwriting again saying, “How could you ever right these wrongs, when you don’t even write your songs?”

The song was pretty good, as the entire album was. But let me just stop all the talk about Pusha T’s album right here. It just doesn’t matter anymore.

Drake didn’t even let Pusha T’s album be out for more than a day without dropping his response, “Duppy Freestyle“.

Where do we even begin with this diss. The whole song is a diss towards Pusha T, but also to Kanye West, who obviously has been with Pusha T since G.O.O.D. Music started and also produced all of Pusha’s “Daytona” album. Here’s the top lines from the 3 minute onslaught.

“Father had to stretch his hands out and get it from me, I pop style for 30 hours, then let him repeat”
This is a reference to Kanye’s songs “Father Stretch My Hands Pt. 1 & 2” and “30 Hours”, while also referencing Drake’s song “Pop Style” that Kanye was featured on. Drake’s talking about his ability to write as a rapper and how Push’s running mate values his writing. These claims that Drake had his hand in these Kanye songs were confirmed in the past by none other than Mr. West in this tweet.

I've done things for him I thought he never would need
Father had to stretch his hands out and get it from me pic.twitter.com/2sl22qB4rR

“You not even top 5 as far as your label talent goes”
This may be a bigger stretch than what Michael Jordan did against the Monstars, but it’s still hilarious and would definitely get under King Push’s skin.

I can see you putting Kanye West and Big Sean above Pusha (even though I wouldn’t at this point). Other than that you could mention Desiigner, CyHi The Prince, and maybe Teyana Taylor? I don’t know. But any way you shake it I’d say Push cracks the top 5 of G.O.O.D. Music. But that won’t stop Drake from trying to rub Push the wrong way.

“I could never have a Virgil in my circle and hold him back ’cause he makes me nervous, I wanna see my brothers flourish to their higher purpose”
This right here might be the most vicious line Drake drops, and it’s directed right at Kanye. Virgil Abloh is the very talented head of menswear design at Louis Vuitton. Before that he was a longtime collaborator with Kanye on many things. In recent interviews Kanye has said that Virgil becoming the head at Louis Vuitton made him “nervous“. It seemed as though Kanye was a little jealous or scared of his friend’s success. From that you can maybe infer that Kanye may have been trying to hold back Virgil. Kanye can’t be happy about Drake making this accusation, so hopefully he doesn’t go on a Wiz Khalifa type Twitter rant about Drizzy Drake.

Many lines about how Pusha T’s former career as a professional coke dealer is exaggerated
This is what has really started this beef between these two. Drake made comments in his song “Two Birds, One Stone” where he questioned the legitimacy of someone’s claims of being a drug dealer. As Pusha T might be the most infamous drug dealer turned rapper in the game, and because Pusha T had previously made fun of a certain someone’s ghost writing, it was inferred Drake was talking about him.

There’s absolutely no proof that Push isn’t the former cocaine cowboy that he makes himself out to be, but I’m sure it gets under Push’s skin that this ghostwriter-using motherfucker is coming at the subject that he has built his career on.

“Tell ‘Ye we got a invoice coming to you, Considering that we just sold another 20 for you”
Drake ends the song with this line, and he ends the night with this Instagram post.

This was one of the more entertaining days/nights for Hip-Hop on social media. Pretty much all day the internet was buzzing about the Rap world. The funny thing is, NO ONE was talking about Zaytoven’s album, YG’s new single, or even A$AP Rocky’s first solo album since 2015! You probably forgot I even brought that up earlier! That’s just the power Drake wields though. An unforeseen diss track from Drake is essentially a fully loaded Infinity Gauntlet and with one snap of his fingers, Drake can turn the Rap game into dust (spoiler, I guess).

Other rappers can’t even have one day to themselves without the most entertaining man in Hip-Hop making his way into the headlines. Pusha can’t be mad though, it’s definitely giving his album even more publicity. So Push, go ahead and pay up on that invoice. 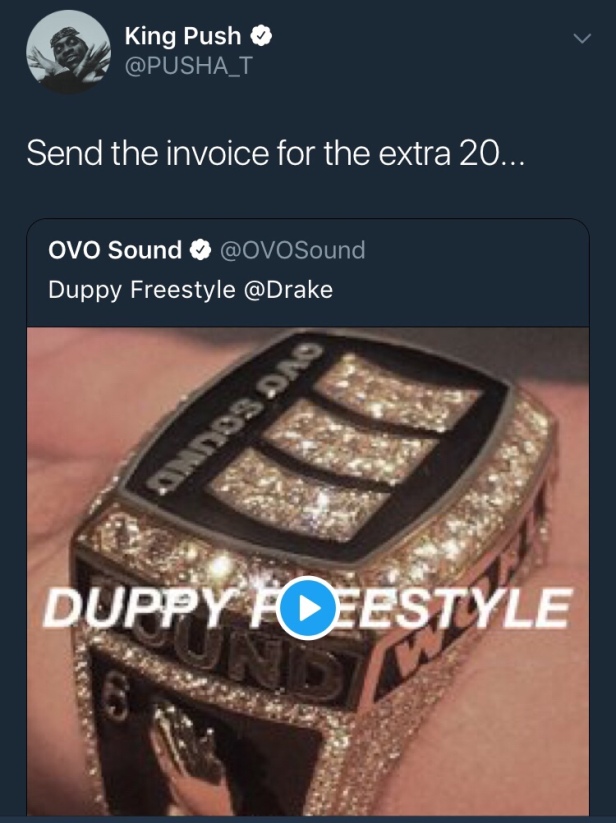